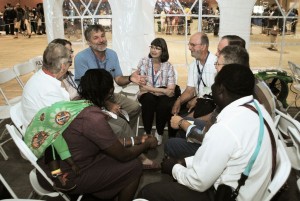 In his friendship group at the Mennonite World Conference assembly, Francis Ojwang found that getting to know fellow believers from distant places brought an unexpected blessing.

The Kenyan pastor had hoped that his wife, Everline Achieng, could travel with him to PA 2015.

But, like some 300 others from various countries, Ojwang’s wife’s visa was denied. The couple had spent more than $1,000 on expenses such as visa interviews and passports – and half of it had been for nothing.

“I was disappointed, but not to the breaking point, because I believe all things work to good for those who love the Lord,” Ojwang said.

He shared his story with Friendship Group No. 348 – one of nearly 300 circles of about 10 people each that met for 45 minutes after each morning worship service.

The rest of Ojwang’s group, all from the United States, took up a collection. At their last meeting, they gave the father of six an envelope containing enough cash to cover a significant part of his loss.

“This is a great surprise and blessing,” he said.

He promised some of the funds would help the orphans who make up about half of the 120 children in his congregation’s Sunday school.

Before the gift, he had $5 in his pocket.

Appropriately, the day’s theme was “Walking in Giving and Receiving.”

Friendship Group No. 348’s experience of cross-cultural sharing was one of countless moments — worshipping with the multitude, listening to music in the Global Church Village, competing for the Anabaptist World Cup or visiting in the hallways — that drew Anabaptists from around the world into closer fellowship.

Paul Schrag is editor of Mennonite World Review. He was part of the Meetinghouse team of editors reporting on the plenary sessions at Assembly 16.