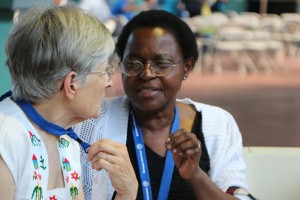 What was intended as a forum for European women theologians to discuss how they can network with each other and others in the MWC family ended as a time of special blessing for one woman.

The group was small. Only five women attended in addition to Elie Soto, the convener from the fledgling Global Women’s Network, and it wasn’t clear that the women felt a strong need for a network of women in Europe.

The conversation shifted to ordination, what it is and what it means, and whether it is really necessary, especially for women.

Coot Winkler Prins, a pastor in the Netherlands, noted that while almost half the Mennonite pastors in the Netherlands are women, more women than men are not ordained. She very much wanted the validation and blessing that a formal laying on of hands during an ordination service would give, but her congregation never did that for her.

With her voice breaking, she described the pain of a recent conflict in her church that led to her decision to retire in two months.

As the meeting ended, Elie Soto knelt down on the floor and invited Coot to kneel down with her. “I want to pass my ordination on to you,” Elie said to Coot. While all the women present laid their hands on Coot, Elie prayed for her.

After the prayer, the tears streamed down Coot’s face as she described her sense of peace and healing and offered profuse thanks for what had just happened.

It was indeed a holy moment.