“My world is too small; I need others”

By Virginia A. Hostetler, with reports by Harriet Sider Bicksler and Elina Ciptadi-Perkins 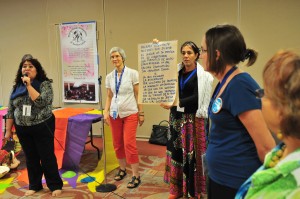 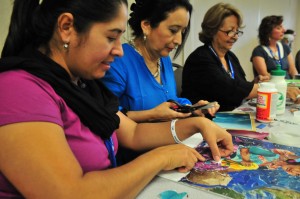 In regional sessions, women from Asia, Latin America, North America and Europe heard updates of what is already happening and considered how they might work together in more formal networks within their own regions.

These sessions were followed by a joint gathering on Friday afternoon, in which women from all the continents were invited to give perspectives about a global network. Hosted by the Latin American women theologians, the three-and-a-half-hour gathering included liturgy, singing, movement and art, along with reports and group discussions. Close to 100 women participated.

When asked about the need, the Latin American participants responded with an enthusiastic “Si!”

Comments included, “I know that my world is too small and I need others.”

There was consensus to move ahead by appointing regional contacts to work on implementation.

Over the years, MWC has supported networking opportunities and theological training for women. However, of the 150 delegates to the General Council, which met 16–20 July 2015, fewer than a dozen were women. As one woman from the Global South exclaimed, “Is this equality? Is this just? In our churches the majority is women!” Another said, “Without women’s voices, we’re missing half of the wisdom of God.” 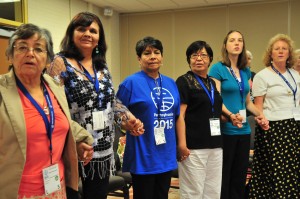 (The General Council is comprised of church leaders from around the globe selected by the MWC national member churches and conferences.)

The women theologians’ movement has its beginnings in Africa, with the formation of the African Anabaptist Women Theologians in 2001. The group has encouraged and facilitated theological training for women from various African countries, in partnership with Mennonite Church USA and MWC. The African group did not meet in Harrisburg. 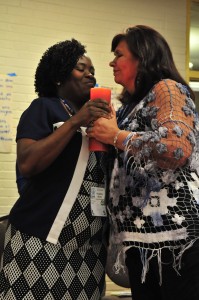 There is no formal network in Europe or Canada and the U. S., however, women gathered for regional meetings in Harrisburg to discuss possibilities.

Perhaps reflecting the larger reality of women’s struggles to gain recognition and status in the church, the meeting room designed for all the women theologians meetings was at the far side of the Farm Complex, distant from the dining and gathering areas, with little signage along the way. 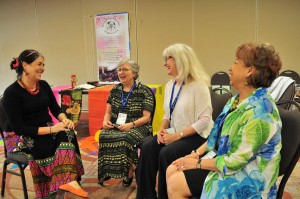 The gatherings also had a communal artistic expression. Audrey Kraybill, an artist and pastor in Lancaster, Pennsylvania, spearheaded a decoupage project titled “Women in Conversation.”

At the large Friday gathering, a piece of the communal artwork was signed by participants, with the plan to send it to the women from the Democratic Republic of Congo who could not get visas to attend the assembly.

Virginia A. Hostetler is web editor for The Canadian Mennonite. She is part of the Meetinghouse team of editors reporting on the plenary sessions at Assembly 16.