Assembly called to wrestle with independence and community 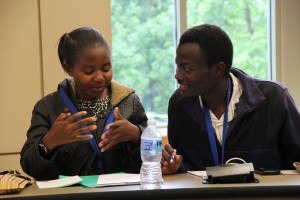 HARRISBURG, Pennsylvania, USA – Each person is never alone. They must live in community. Yet each also craves independence and autonomy.

Dutch Mennonite pastor and retreat centre host Wieteke van der Molen told Mennonite World Conference assembly attendees 24 July 2015 that since the interests of the group will always collide with those of the individual, each person must wrestle with friction and frustration.

Van der Molen said the patriarch Jacob thought of no one but himself until he lost his community, had only autonomy. Until someone came along and struggled with him all night (Genesis 32).

Despite living by his own rules, Jacob wasn’t judged by God, but God remained present, just as he is present with us today.

“God merely walks with you, no matter the outcome,” van der Molen said.

She challenged her audience to make choices according to one’s own desires while acknowledging the surrounding community’s desires, hurts and frustrations.

“It is about taking responsibility for your actions,” she said. “For those of the community, for yourself, and, if necessary, making amends.

“To keep some sense of autonomy within community is like constantly wrestling with man and God and, most of all, yourself,” she said. “And even if you win, it leaves you slightly limping.”

The evening offering highlighted Nohemy Ruth García of Spain. She presented “Despertar” (Awakening), a song she wrote to commemorate the 10th anniversary of the 2004 Madrid terrorist bombing, which killed 191 people and injured 1,800.

“In our churches, in our homes and in our communities; it’s a time for peace,” she said. “This song is a wakeup call. . . . Let’s take action and really work for peace for what God wants to bring into his kingdom.”

As she sang, the first to wake up were half dozen glowing cellphones waved in time by people sitting in a high corner of the arena.

Soon, the despertar enveloped the space with thousands of lights joining one voice shining into the darkness.

Emotion evident on her face, García finished the song with a message that needed no further translation.

The service concluded with Communion, including a gluten-free bread option and grape juice served in compostable cups.

Tim Huber is associate editor for Mennonite World Review. He is part of the Meetinghouse team of editors reporting on the plenary sessions at Assembly 16.