The same heart for God unites across language and culture 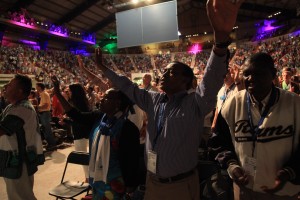 At the Mennonite World Conference Assembly, prayer was constant. A room – open all day long – was set aside where people could pray for different prayer requests.

A 40-foot x by 24-foot world map, courtesy of the Rosedale Mennonite Mission, was displayed in the ample lounge. The person or small group that wanted to intercede for any particular region or country was asked take their shoes off to stand, bend or kneel next to the nation they wanted to pray for and leave a small battery-operated light on as a permanent sign of prayer.

When the event to launch all the organizational details of the current MWC Assembly was held more than a year ago, the importance of emphasizing prayer and reminding the world Anabaptist community its value of prayer was stressed, says prayer network coordinator, Joanne Dietzel.

Before the beginning of the Assembly, 300 people from around the world joined the Prayer Network and prayed regularly for event logistics and the Assembly attendees.

People from all over the world came to the prayer room during the Assembly.

Dietzel and the team that supports the work of providing guidance and assistance to those who came to the place saw and heard how brothers and sisters from different ethnic groups, language backgrounds and needs came together to intercede.

“We can come from different communities and cultures,” says Dietzel, “but the core of our faith is the same: Jesus Christ Lord and Saviour.”

Carlos Martínez García is a pastor and journalist from Mexico.