Judit Menéndez, MWC Global Youth Summit delegate from Spain, shared her church’s story of Walking in Receiving and Giving as her country experiences its worst economic crisis since the civil war in the 1930s.

She belongs to the Comunidades Unidas Anabautistas in Burgos, about two hours north of Madrid. She has a degree in education for children with special needs, but teaches English and helps children with homework in an after-school centre.

“This job is what is available right now, even though it is not exactly what I’m qualified for,” says Judit. “But I’m grateful to be having a job, a house, and a supportive community at church.

“Compared to five years ago, things are improving now. Young people can get a job, even though it may not be what they want or are qualified for,” Judit adds.

As of March 2015, inflation has been kept low for the past 18 months. A new policy with an emphasis on exports and increasing Spain’s competitiveness has helped put the country on the right track for economic rebound.

Her church has been responding to the people affected by the crisis by creating a food bank for church members and neighbours. From the food bank, this initiative grew since 2012 to include a financial reserve to be given to church members who are most in need.

“It has been a challenging time, but one that has been a blessing in disguise,” says Judit. “Family members are taking care of each other, the church is more united and purposeful, and we are stronger in our faith because of it.”

Spain still has a long way to go. Unemployment rate still sits at 23%, wages are stagnant and permanent employment is still almost impossible to find especially for new graduates. But Judit is thankful for a trying time that has pushed the church to be a united community, emulating the church of the first century that “shared whatever they had with those who had needs” (Acts 2:42–47). 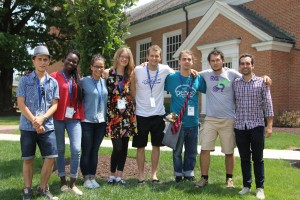 Elina Ciptadi-Perkins is a copywriter and communications consultant. She is an Indonesian Mennonite who lives in Singapore with her family.