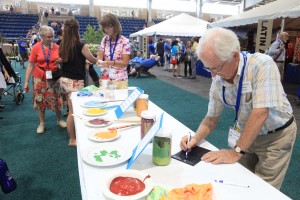 “This seems like an innocent form of community graffiti,” Roland Yoder says with a smile as he watches the hub of activity around the three-dimensional sculpture of the Mennonite World Conference (MWC) logo that Yoder designed for the Global Church Village (GCV) at PA 2015.

Visitors to the village were invited to put their thumbprints on the wooden sculpture located in the GCV square. By Saturday, the last day of the MWC Assembly, the white spokes were covered with colorful prints left by people from around the globe.

Yoder, who spent almost 12 hours onsite each day during the Assembly, observed the transformation in silence. A note pinned to his shirt reads, “My voice is on vacation through July.”

Yoder is quiet by nature, says his wife, Dottie. But his silence during the MWC Assembly is not by choice. Yoder was recently diagnosed with polyps on his vocal chords, and his doctor prescribed six weeks of silence; this was week five.

“Not a convenient time,” says Yoder, writing on the notepad he keeps in easy reach. “Thank God for email. When my wife and I made phone calls, we needed two phones. She would talk and I would write answers when necessary which she would relay.”

The sculpture of the MWC logo was intended to be a focal point in the large arena that housed the village.

Originally, Yoder was asked to design something that could be hung from the ceiling. But Yoder wanted people to be able to touch the sculpture and to interact with the piece in a way that would encourage them to identify with MWC. That led to putting the sculpture on a simple pedestal and the idea of decorating the sculpture with thumbprints.

“A thumbprint is a personal thing,” says Yoder.

Yoder’s voice was out of commission but not his eyes or his ears.

“I experienced a lot of joy in seeing people from around the world enjoying the natural environment which we had the privilege to be a part of creating,” he says.

Connie Faber is editor of the Christian Leader, the publication of the U.S. Mennonite Brethren.