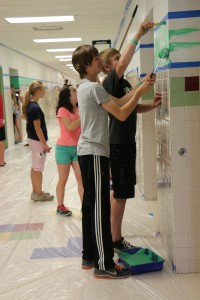 Harrisburg, Pennsylvania, USA – One of the many afternoon activities at Mennonite World Conference’s PA 2015 is the opportunity to invest in service projects. Side by side, Anabaptists from around the world work together within the Farm Show Complex and out in the city of Harrisburg.

“Service is a core value of Anabaptists,” says service projects coordinator Dawn Brotherton. The call to follow Jesus requires that we love and respond to those in need.

Four different service initiatives have given people ways to respond to that call during PA 2015.

In the North Hall, volunteers cut, knot and sew handmade comforters for Mennonite Central Committee. Maria Erling, “a very avid quilt knotter,” spoke of her desire “to be a part of helping in some way.”

Her friend Theresa Eshbach admitted no fondness for sewing, but felt drawn to this project for another reason. It reminded her of her mother’s involvement with women in the Church of the Brethren in making comforters for displaced persons during World War II.

MCC will send the comforters made at PA 2015 to hospitals, refugee camps and orphanages throughout the world.

In an adjacent parking lot at the Farm Show Complex, volunteers work with the MCC Mobile Cannery to preserve vegetables. Some of this food is distributed right away to local Pennsylvania food banks.

Two houses are also being built during this Assembly under the direction of Mennonite Disaster Service. These will bless two families in the United States who lost their homes in natural disasters.

Woodrow Cullen Jr.’s home in Maryland suffered irreparable damage from Superstorm Sandy in October 2012. And in June 2014, a tornado destroyed the home of Joshua Staub and his family.

Thanks to the contributions of volunteers and the work of MDS, both families will move into new houses this fall.

In addition, buses of volunteers go out every afternoon to local schools in the Harrisburg School District to revitalize worn down educational spaces with fresh paint. Many of these volunteers are teenagers involved in the youth program.

Stuff is getting done. Over the course of Assembly’s five days, attendees will contribute over 1,800 hours to these service projects as they live out Jesus’ command to love those in poverty and need.

Matthew is a husband, a father to two young girls, and a pastor at New Life Community Church in Mount Holly Springs, Pennsylvania.