A Gift of Peace from the Persecuted

As GYS 2015 discusses gifts and calling, a participant shared his church’s story of giving gifts of peace in response to persecution that affected more than 50,000 Christians in his village. 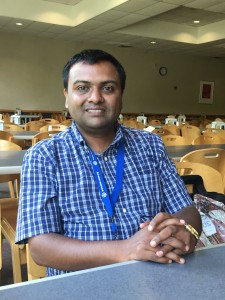 Amit Andrew Roul is a young leader in a rural Brethren in Christ (BIC) church in the Kandhamal district of Orissa, India. Growing up as a Christian minority, he understands that his family of faith is under constant threat of persecution. One such incident occurred in August 2008, where “My church friends and I were among the 50,000 plus Christians who had to flee our homes and hide in the forest as mobs burned down our homes, churches and hospitals. Some of us were personally attacked too,” Amit mentioned. In this incident, dozens of Christians were reportedly killed for their refusal to renounce their faith.

As villagers returned to their homes and rebuilt what had been destroyed and vandalized, Mennonite Central Committee (MCC) also sent a team to evaluate how they could prevent similar attacks in the future. Among their findings were that many of the attackers were influenced by alcohol, lack of sustainable livelihood and food security made it easy for someone from another state to provoke local Hindu villagers to see minority groups (including Christians) as a threat. “There was also a lack of skills in peaceful conflict resolution,” Amit added.

Based on the findings, MCC worked together with Mennonite Christian Service Fellowship of India and BIC Church Orissa to implement a holistic peacebuilding program in Kandhamal. Conflict resolution skills training is coupled with programs for alcoholism rehabilitation, medical camps, health and hygiene, literacy, and vocational training on farming to ensure food security. Persecution was responded to with a community building program that helped them realize that the Christians are not the enemy.

Six years later, the Christians in Kandhamal have not experienced any attacks. Amit’s village has formed a village-level peace committee that oversees the programs; one of the men who led the attack was appointed president. “He has apologized for what he did, and realized that he should not have attacked his fellow villagers,” Amit explained.

Amit ended his testimony with a call to focus our attention on God and not lose hope, “In the face of persecution or opposition, seek God and His guidance. I can tell you that He is able and He answers … just like He answered our prayers in Kandhamal. So don’t give up, but look up to him.”