Harrisburg, Pennsylvania, USA – Yukari Kaga, a pastor from Japan, admitted Peter’s praise in his letter to the early church seems “a little strange to me.”

When we struggle with fear or anxiety, our hearts shrink, Kaga said. Then we get depressed, and self-pity covers us. 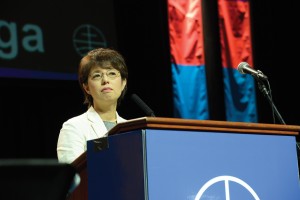 Yukari Kaga of Japan preached the sermon at the evening worship service, focusing on “Walking in Doubt and Conviction.” Photo by Kazutomo Ray Epp

“However, there is a life that gives a true life,” she said.

The Chinese character (shared by Japanese kanji) for mercy resembles an antique clothing iron. Mercy is like an iron: not too hot or too cold, but “exactly the right temperature for us,” she said.

“This is the work of the Holy Spirit,” she said. “It irons our shrunken heart . . . many times again and again.”

“Our faith hasn’t disappeared because of God’s shield,” she said. “This is our Christian hope.”

“Jesus’ death has swallowed death in victory,” she said in closing. “This is the work of God’s great power.”

Kaga is the pastor of several congregations, including Japan Mennonite Obihiro Christ Church and small churches in the Tokachi region of Hokkaido. She serves as secretary of her conference’s executive committee, at the Mennonite Education and Research Center and as chief director of the Peace Mission Center.

A graduate of Eastern Mennonite Seminary, Harrisonburg, Virginia, with a degree in pastoral counselling, Yukari also holds an M.Div. from Tokyo Biblical Seminary.

The worship service began with music from Indonesia, Japan, India and more. The service ended with an upbeat rendition of “When the Saints Go Marching In.”

Anna Groff is executive director of The Mennonite. She is part of the Meetinghouse team of editors reporting on the plenary sessions at Assembly 16.