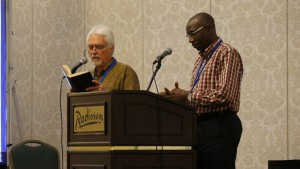 James Kraybill of the USA and John Fumana of DR Congo (behind podium), chair of the Global Anabaptist Service Network, speak during the meeting 16-20 July 2015. Photo by Max Wiedmer

Harrisburg, Pennsylvania, USA – “The Holy Spirit is wooing the whole church to witness and service,” said Richard Showalter, chair of the MWC Mission Commission (MC). He welcomed delegates and observers to the joint assembly of the Global Mission Fellowship (GMF) and the Global Anabaptist Service Network (GASN), July 16–20, 2015, at the Radisson Harrisburg convention centre.

“We’re all called to witness in word, deed and being,” Showalter said. “Our different gifts and callings are brought together in the Spirit of Jesus.” 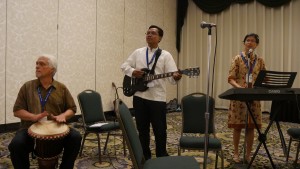 Agus Mayanto of Indonesia, chair of the Global Mission Fellowship, plays guitar during a musical performance. Photo by Max Wiedmer

John Wambura from Tanzania left a good job at the U.S. embassy in Dar es Salaam, to work for a small, poor congregation. “I was fighting poverty, disease, ignorance – and sin,” he said.

As Wambura helps people see what they have, gives training in business and began revolving fund meetings couched in worship and Bible study, the church has grown and had an impact on the community. Hundreds of people from different religions and backgrounds now come to more than 100 groups in 30 regions.

Paulus Hartono works for peace by deploying mixed teams of Muslims and Christians in disaster relief in the Muslim community.

Plenary speaker Ofelia Garcia, spoke on the theme of “walking with God” in mission and service by examining Jesus’ words about the cost of discipleship in Luke 9. Sharing about her work with children in Chihuahua, Mexico, Garcia noted that children are often the most needy in a community.

“The call of Jesus cannot be postponed,” said Garcia, a Mexican pastor and MC member. “We must let go of the tyranny of material goods and accept a new faith family that comes ahead of our human family.”

In a plenary address, John Fumana of the Democratic Republic of Congo spoke from 1 Corinthians 12:4–12 (the body and its many parts).

“We are called to be creative stewards in partnerships,” Fumana said. “There can be no service without mission and no mission without service.”

As MWC grew beyond a celebration gathering every six years, Anabaptist mission and service leaders from around the world advocated for space to learn from each other, said MWC general secretary César Garcia. These impulses gave birth to the Mission Commission in 2009. The GMF, formed in 2003, and GASN, formed in 2012, operate under it.

There are 72 members of GMF and 55 members of GASN, says Rafael Zaracho, MC staff secretary: 42 GMF and 39 GASN delegates attended the Harrisburg meeting.

“These networks are an integral part of our global family of faith,” said César García. 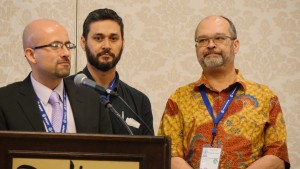 In closing, out-going chair Showalter said this was the first GMF/GASN gathering that was “so highly integrated.”

We have decided to follow Jesus – no turning back, no turning back. Passionate voices rang out the promise as the triennial mission and service gathering closed with the song penned by an Indian martyr of the 18th century.

Jewel Showalter is a writer, grandmother of 14, and servant of the global church.